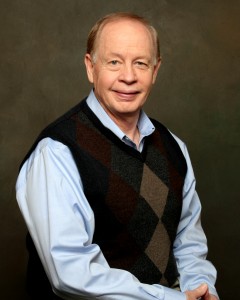 Dr. James (Jim) Grassi is an award winning author, communicator, outdoorsman, former pastor, and television co-host. Jim has presented hundreds of messages and programs around the world that helped equip people to fulfill The Great Commission (Matt. 28). He brings a sense of challenge, wisdom, excitement, and humor to his presentations as he connects with people of various cultures and backgrounds.

Through his multi-media outreach ministry he encourages participants towards a greater understanding and appreciation for evangelism, discipleship, and the development of creating vibrant men’s ministries. His practical approach to teaching Biblical truth has captivated audiences around the world.

Jim Grassi is the Founder/President of the culturally strategic Men’s Ministry Catalyst, an organization he incorporated in 1981. Grassi is also an award winning author of thirteen books, including The Spiritual Mentor, Building a Ministry of Spiritual Mentoring, More Than a Fisherman, Finishing Well – Finishing Strong, Guts, Grace and Glory, The Ultimate Fishing Challenge, Heaven on Earth, In Pursuit of the Prize, The Ultimate Hunt, Crunch Time, and Crunch Time in the Red Zone. Jim has also written numerous magazine articles, booklets, and tracts.

Grassi was born and reared in the San Francisco Bay Area. Known for his evangelistic heart, he teaches people from a background as an outdoorsman, public administrator, hall of fame fisherman, college professor, businessman, community leader, and pastor. He has served in the capacity of chaplain with two NFL teams and the Post Falls Idaho Police Department. His forty-five years of professional experience in the outdoors and with sports teams has given him a unique perspective on working with men.

As a popular speaker who has addressed hundreds of congregations, men’s gatherings, professional teams, and family groups over the past five decades, Jim has appeared in churches and conference centers across the nation. Grassi received his B.S. in Recreation/Park Administration, an M.P.A. from California State University-Hayward, and a Doctor of Ministry from Columbia Evangelical Seminary. Considered one of the most versatile outdoorsman in America, he is in high demand to be the Master of Ceremonies for numerous sport shows, television programs, and hunting/fishing events throughout the West. Grassi is a member of the International Platform Association, Sports Outreach of America, Professional Athletes Outreach, Outdoor Writers Association of America, and has been recognized in International Who’s Who for his efforts in strengthening America’s families and religious heritage. In 1996 the Religious Heritage of America Foundation awarded Jim the prestigious Faith and Freedom Award for his work in creating followers of Christ and strengthening America’s families.

Grassi and his wife, Louise, make their home in Post Falls, Idaho. They have two grown sons in full-time ministry, Dan and Tom.

If you would like to discuss a speaking engagement.

9
If you would like to become a strategic partner with the R:12D team.
9

If you have questions or would like to discuss with Dr. Grassi how best to utilize the R:12D Disciple series to create authentic disciples and deploy the truths that transform lives.